These DisplayPort cables allow you to connect your PC to a monitor where both devices support DisplayPort. See also DP-Mini DP cables. 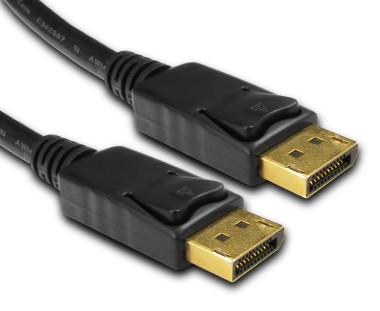 We recommend that DisplayPort be used in preference to HDMI where possible because DisplayPort supports UHD (Ultra High Definition) video resolutions at 60 Hz. In contrast, most PC implementations of HDMI are based on HDMI version 1.4 which does not support UHD / 4K. The newer HDMI 2.0 standard has yet to see widespread adoption in the PC industry, so if you intend to run UHD at 60 Hz then a DisplayPort connection between your PC and your monitor will be required. Running your PC at a 24 Hz or 30 Hz refresh rate is usually undesirable because it produces jerky mouse pointer movement and a general perception of PC sluggishness.

While other retailers may try to sell you a more expensive cable claiming that it will provide a better picture quality, we are here to debunk that myth. Contrary to what you might think, the more expensive cable will not give you any better picture quality. DisplayPort uses packetised data, similar to USB and Ethernet, to send digital display and audio data, therefore you either get all of the data or you don’t. Unlike older video interfaces, you don’t get a “better” picture or any other incremental improvements with a more expensive cable. But of course a poor quality cable could lead to data errors and obvious corruption of the video or audio data, so we would still recommend that you avoid the very cheapest cables.

Very impressed with support from the team re a problem on our 4 year old out of warranty unit (caused by a Windows issue rather than anything Quiet PC had done) - rather than charge unnecessarily, the team provided same day highly detailed instructions with photographs to help avoid an unnecessary return and diagnostic costs - support staff actually seem to care about helping - could teach a few other IT companies a thing or too!
(Review via Trustpilot)