Free delivery on all PC systems 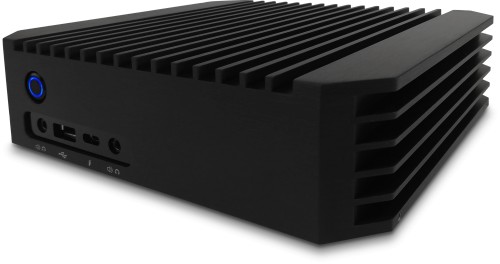 Tranquil’s industrial and completely fanless chassis is optimised for efficient cooling and durability. This system is designed to withstand both industrial and environmental hazards. The proficiency of the fanless design means it is protected from dust, floating debris, and moisture that would naturally damage a typical industrial mini PC. With the elimination of the fan and the use of solid-state drives, there are no moving parts in the system allowing for a silent operation service, a significantly improved start up speed, and resistance to vibrations and shocks, allowing for a longer expected lifespan.

The Mini Multi display PC provides powerful performance thanks to the supplied embedded AMD Ryzen APU in the Sapphire Tech motherboard. The FS-FP5V motherboard incorporates an AMD Ryzen V1605B APU (Advanced Processing Unit) which features four cores and eight threads running at a base speed of 2.0GHz and a up to 3.6GHz turbo speed. A maximum of 32GB of SODIMM memory can be installed as well as a single M.2 SSD from 120GB to 2Tb, allowing for optimum enhancements. Furthermore, AMD APU features a Radeon Vega 8 graphics with a maximum memory share of 2048MB which gives good performance if it is intended to use the PC for light gaming.

During our evaluation of the Mini PC we tested to make sure it would be able to connect to four 4K monitors that output a resolution of 3840 x 2160 each. We are delighted to say the Mini PC passed this with flying colours. So if you are looking for a small PC that can output a total resolution of 15,360 x 8640 via four monitors then this PC is the answer!

The price of many pre-built PCs these days is often supported by cash kickbacks from software companies who pay hardware manufacturers to pre-install limited or trial versions of their software and then hope that the customer pays to upgrade to the full version. The downside to this approach is that the new PC comes pre-loaded with a lot of “junkware” which bloats the operating system and can cause severe performance degradation.

Here at Quiet PC we believe that customers have every right to expect the best possible performance from a brand new PC, so every system we build comes with our Clean Build™ promise. We install the operating system (if you order one), motherboard drivers, OS updates and Microsoft Security Essentials / Windows Defender - that’s it. You won’t be pestered by pop-ups and nag screens and you can get on with using your new PC immediately without having to uninstall lots of junkware first. Your new machine will boot in super-quick time and will stay running quickly for many months and years to come.

We offer free hardware technical support for as long as you own the machine. This support covers any hardware query or problem, including advice on maintenance and upgrades. We regret we can’t offer software support or training so we would recommend contacting the software vendor in this instance.

Our hardware warranty runs for two years and is “collect and return” meaning that you don’t need to worry about getting the machine back to us - we will instruct our courier to collect it from you on a day of your choosing, then after we have checked and repaired it, we will send it back to you by express courier at our expense. In addition, unlike many other PC suppliers, we have an “open-case” policy which means you are free to open the machine and perform your own minor modifications or upgrades without worrying that your warranty might be affected.

“My Quiet PC Experience - Its a good’an!”

“Researched many different components and systems which could be used for music production. Discovered this site from recommendation from a Youtube video.

Was at first deceived by the amount of money id save compared to the other systems I was looking for (was initially going for daft over kill specs like £400 Intel 6 core processor and 32-64gig fastest ram with x79 chipset).

At first I wasn’t, but in hindsight im quite happy with the selection of components offered. Their not top top spec, and I thought this was a limitation but after building the system, I was grinning like a Cheshire cat when It booted for the first time (transitioned from a dying laptop to a speedy 4/8 core 4ghz CPU with 16gig of 1600mhz ram booted from a top end Samsung SSD). the parts are everything you need for a top end fast and quiet system.

The only issues I have had is the build quality of the power supply is somewhat lazy in areas. (ive written a separate review on the FSP Aurum AU-500FL Xilenser 500W FL Fanless page) I wasn’t impressed with the excessive glue used, the lengh of the CPU cable the mild buzzing noise that comes from it occasionally, especially as its the ‘Gold rated’ most expensive power supply).

Also the heatsink was a bit tricky to fit. if building yourself remember to install RAM before heatsink! otherwise you waste a bunch of time having to take heatsink off again, reapply thermal paste and refit heatsink (like me!)

Everything else was a doddle. This was my first build. not to take custom away from Quiet PC but i really enjoyed and would recommend building it yourself. It was on the whole easy to do (i had my trusty dying laptop with a Newegg PC building tutorial handy) and i learned a tonne about PC’s in the process (i also saved a bunch of money which i spent on a new monitor and monitor speakers!)

Ive tested my system, installed the drivers etc and the system is brilliant! 7.8 windows scores for calculations & memory operations per second , 7.9 for disk data transfer rate, and a whopping 6.7 for graphics performance (amazing given i dont even have a graphics card included, solely motherboard & CPU graphics) . Soooo fast / responsive / quiet /cool! the temp hasnt even got close to ‘Hot’ (even with 80w CPU, which I was worried about).

The service throughout was great (Ellen was extremely kind and helpful when dealing with my queries. There was a slight delay with the delivery due to stock limitations but this was explained to me prior to me placing the order. Once all parts were in stock delivery was exceptionally quick

Phew! Overall 10/10 for service, I would definitely recommend and buy from Quiet PC again!